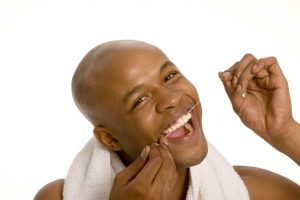 You probably saw the recent firestorm of news stories proclaiming the (probable) End of Flossing. The buzz came about after the U.S. Departments of Health and Human Services and Agriculture quietly removed the recommendation for flossing from their Dietary Guidelines for Americans. But you know what? Flossing is just common sense — no matter what the news cycle says. Dr. Boehmer, your dentist in Albuquerque, explains more.

5 Reasons You Shouldn’t Give Up Flossing

Don’t ditch the dental floss just yet. We’ve got five great reasons you should keep cleaning between your teeth at least once every day.

No matter how well you brush your teeth, there are certain areas your toothbrush just can’t reach — like between the teeth. That’s why dental floss is vital. It gets into those hidden areas to remove food particles and prevent plaque buildup. Want proof that dental flossing works? Take a whiff of your used floss the next time you’ve skipped a few days. That’s the odor created by all that left-behind bacteria — and it’s a smell you’re allowing to accumulate in your mouth, unless you floss at least once a day.

Flossing was dropped from the Dietary Guidelines because they found the research supporting its benefits to be lacking. But that’s because its conclusions can’t be applied to all patients — as patients are, of course, individuals with different needs and states of oral health. The truth is that flossing is beneficial for the majority of people, and one big benefit is that it helps to prevent gum disease. Flossing reduces inflammation and the risk of developing periodontal disease, the infection that causes symptoms ranging from bad breath and tooth sensitivity to eventual tooth and bone loss.

There’s no denying that flossing removes plaque buildup between the teeth. Plaque is the sticky biofilm that occurs when acids from food and beverages mix with saliva and bacteria in the mouth. When plaque isn’t removed, it turns into hard, yellow tartar. The transformation can occur in as little as 24 hours. Both plaque and tartar lead to tooth decay — but flossing helps prevent the occurrence.

Evidence of the link between gum disease and other serious health conditions is continually growing. We know that periodontal disease is linked to heart disease, diabetes, stroke, early birth, low birthweight, dementia, and more. Flossing reduces inflammation which helps to prevent gum disease, which can reduce your risk for these health conditions, too.

#5: Think About the Research

So we need more evidence to prove that flossing is beneficial. But why isn’t there enough to start with? One expert suggests that there simply isn’t a lot of research money put into examining things people already know are effective. There’s so much ground to cover in the dental world, after all — like how gum disease diminishes our overall health — that most people just don’t bother to study the effectiveness of floss. It’s an interesting point.

The conclusion? Your dental office in Albuquerque says floss the teeth you want to keep. Check out this video from the American Dental Association on how to floss if you need a quick refresher on effective flossing methods.

Comments Off on Dentist in Albuquerque Says Please Keep Flossing

Sorry, the comment form is closed at this time.